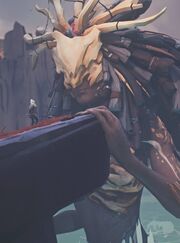 "Though it seems bewildering at times, know that every creature lives with purpose.” - Gefn

Gefn is the giant mermaid-like progenitor of humanity.

Gefn fled when the Ashen fell to the Plains of Darkness. Losing herself in the seas of night and finding herself on many a strange shore. Some say she swam to the very roots of Yggdrasil and gazed upon the worlds that hang from its branches. At the twilight of the Second Age she returned and took a Listener lover, using his seed to create the first humans. Born in the image of the Listeners the first man was smaller, his eyes bigger and more acute, better suited to the greying world.

When the Listeners helped humans to create the Human Heart of Lathyrus, Gefn joined it with the Listener Heart of Lathyrus. A symbol of unity between the two races, the Twin Hearts would be placed in the Tower of Gnomon and used as a focal point for the Lathyrus Seers to bend the power of light to serve all equally.